The Truth About JFK's Head Wound

Upon viewing the Zapruder film, the majority of people are struck by the apparent disparity between the official pronouncement that all shots were fired from behind and the obvious fact that the President was propelled backwards and leftwards by the impact of the projectile that struck him in the head. But over the last four and a half decades, we have been assured by numerous experts working on behalf of the US government that the medical evidence supports only the official fairytale. The President's reaction, they told us, was meaningless. But in actual fact, nothing could be further from the truth. The official autopsy X-rays completely contradict the “lone nut solution” and demonstrate that the fatal shot was most likely delivered by a gunman on the infamous “grassy knoll.”

Dr. Humes' Big Lie...
JFK's chief autopsy surgeon, Dr. James J. Humes, claimed that upon examining the President's head the doctors found a defect in the scalp (see picture above) “2.5 centimeters to the right, and slightly above the external occiptal protuberance” (the small, boney bump on the back of the skull). He further claimed that upon reflecting the scalp they found a “through-and-through” hole in the skull corresponding with the scalp defect. (2H351-352) Thus, the autopsy surgeons reported that the bullet entered through this small hole and exited through a large 13 cm defect on the right side of the head. To illustrate the head wound, the Warren Commission decided not to publish the autopsy photos and X-rays and instead Dr. Humes had a Navy artist make drawings based entirely on his verbal descriptions.

Humes further claimed that the "through-and-through" hole exhibited external "beveling" and, in an interview with the Journal of the American Medical Association, claimed that this was absolute "proof" that the bullet passed from back to front: “It happens 100 times out of 100, and I will defend it until I die. This is the essence of our autopsy...This is a law of physics and it is foolproof – absolutely, unequivocally, and without question.” (JAMA, May 27, 1992) Finally, Dr. Humes claimed that the bullet that passed through the head left a track of  "multiple minute metallic fragments along a line" beginning at the alleged small hole and extending to the large defect on the right side. (CE387)
Note: "Beveling" of skull bone is essentially the same as what occurs when a BB hits a pane of glass -  a small hole on the impact side and a larger, cone-shaped defect on the other side.


When the Clark panel and the HSCA pathology panel reviewed the autopsy materials - in 1968 and 1978 respectively - they found that there was no small entry hole where Humes claimed there was one. Still determined to uphold the official story, both panels moved the wound four inches up the head (!) to the approximate location of a large round fragment that it was later claimed was a cross-section of the bullet that had shaved off on impact. But both panels were blowing smoke out of their asses. During its tenure between 1992 and 1998, the Assassinations Records Review Board asked three independent forensic specialists to review the photographs and X-rays and all three were in unanimous agreement that the skull X-rays show no entry hole of any kind at any point on the back of the head. (Doug Horne, Inside the ARRB, pgs. 584-586) And, in fact, both of Hume's colleagues at the autopsy had already admitted as much.
In 1978, Dr. J. Thornton Boswell admitted to the HSCA pathology panel that what they had actually discovered after reflecting the scalp was not a through-and-through hole but a semicircular, beveled notch on the margin of the large defect, (7HSCA246, 260) a fact confirmed by Dr. Pierre Finck in his appearance before the Warren Commission when he explained that a “portion of [a] crater” had been used to identify the point of entrance. (2H379) So the conclusion that a bullet had entered the back of the head at this point was based on an inference and not on observation as Humes had claimed. And the alleged beveling of this notch was not the "foolproof" indicator he claimed it was. When a through-and-through hole is present, beveling is usually a valid indicator. But even then, as Dr. Donald Thomas writes in his brilliant book, Hear No Evil:
“There are important exceptions...even through-and-through perforations, are not infrequently beveled on the impact side...collateral information (evidence from the scalp wound, bone chips, fracture patterns, angle of trajectory, bullet fragments) must all be taken into consideration rather than reliance on external beveling alone...a common exception to the beveling rule are tangential entrance wounds, which may be beveled on either or both sides. The fact is, however, when dealing with fragments or margins of bone, and not through-and-through holes, all bets are off. [emphasis mine] This is because the laminate nature of the cranial bone lends itself to chipping that can easily be confused with beveling.” (pgs. 272-273)
One cannot help thinking that Dr. Humes was fully cognizant of the problems with relying solely on beveling which is why he lied and said that he had found a through-and-through hole. The fact is, as observers of the autopsy have confirmed, the autopsy doctors were confused by the evidence in front of them and, in reaching their conclusions, relied on reports coming in from Dallas that a lone assassin had fired on the President from above and behind.
So What's the Truth?


The true path of the bullet is established by the track of "missile dust" thorugh the brain - as seen on the autopsy X-ray. Although Humes claimed in his report that this fragment trail began at the entry hole he located in the back of the head, it actually begins at the right temple and extends to a point in the back of the head far above both his proposed entrance and the "revised" location offered by the Clark and HSCA panels. 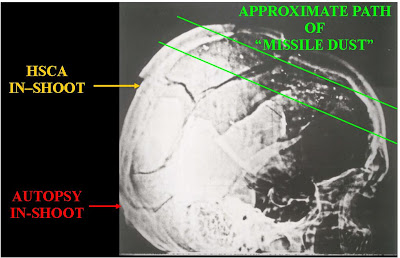 When a bullet disintergrates on striking a skull, the smaller, dust-like fragments are found closer to the entry point and the larger particles are found closer to the exit. This is because the larger fragments, having greater mass, have greater momentum and are carried further away from the point of entry. This is precisely what is seen in the X-ray above, with the smaller particles located at the right temple and the larger ones towards the top back part of the skull. 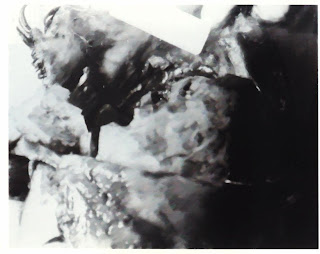 The bullet dust aligns with semi-circular notch in the right temple seen in the above photo (showing the front of the skull with the scalp reflected over the eyes) and the lesion in the hairline seen in the photo below. 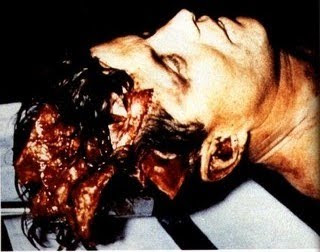 These pictures are consistent and show the true entrance of the bullet in the right temple.
Lone-nut-believers and Warren apologists with no understanding of terminal ballistics usually argue that a rifle bullet entering the right temple would have to exit the left side of the head. This is pure, unadulterated, ignorant nonsense. A bullet will follow a straight-line trajectory up until the point it intercepts a hard suface at which point it will usually deflect, taking the path of least resistance. As Warren Commission Exhibit 844 shows, even bullets fired into soft ballistic gelatin can easily deflect. 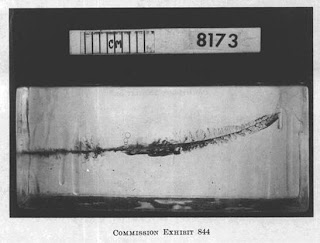 In the JFK case, we have a tangential strike from the grassy knoll deflecting upwards and leftwards - perfectly consistent with the expected effects of momentum, penetration and yaw on deflection. (for more on this, see the aforementioned book by Dr. Thomas)
But What About the Wound in the Scalp?


The autopsy doctors described the "ragged, slanting" defect in the back of the scalp as "a laceration and tunnel, with the actual penetration of the skin obscured by the top of the tunnel." (ARRB MD14) The HSCA panel noted an "abrasion collar" in the "inferior margin" (7HSCA104) which is indicative of an upward trajectory. Obviously, then, the missile that caused this wound came from below and not above.
The anterior X-ray shows a large round fragment attached to the outer table of the back of the skull, aligning with the scalp laceration. 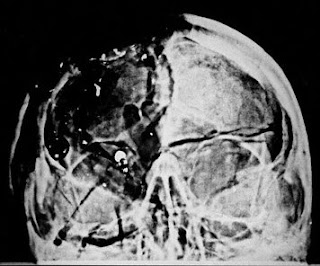 The official explanation is that this fragment represents a cross-section from the center of the bullet that attached itself to the back of the skull whilst the nose and tail carried on out the right side of the head. This is a physical impossibility with no support in the forensic literature and has been rightly dismissed by forensic and ballistics experts. Dr. Russell Fisher, who headed the Clark Panel's review, confided to ballistics expert, Howard Donahue, that the panel had come to the conclusion that it must have been "a ricochet fragment" from the shot that hit the street behind the Presidential limousine. (Bonar Menninger, Mortal Error, p. 65) Despite this being the most reasonable explanation for the presence of this large round fragment on the back of the skull, the Clark panel did not include this information in its report. Why? Because it would have been plainly obvious that it was this ricochet fragment that created the upward tunneling wound in the scalp. And once we realize that the only wound in the scalp was caused by shrapnel from the shot that struck the pavement, all evidence of a rear-entering shot flies right out the window.
Posted by Martin Hay at 08:18